The parade now begins on Main Street near its intersection at Oakhall Drive, in front of the Food Lion shopping center - a few blocks farther north than in previous years. The route continues down Main Street, through downtown Holly Springs, ending at Oak Avenue, just past The Block on Main - a block farther than last year.

The BEST PLACE to Watch the Parade

Your best chance of getting a front-row location to enjoy the parade is along the Main Street sidewalk north of Holly Springs Road. With this year’s extended parade route, the sidewalk from the Food Lion shopping center south to Main Street will be the ideal parade-viewing location.

Need an accessible location to watch the parade? Try the Food Lion shopping center! Accessible parking with a view of the parade is available there, but arrive early. Roads near the parade close to traffic at 9 a.m.

The Town has more than 600 public parking spaces downtown. Locations within a 3-minute walk include the parking lots and deck around Town Hall, portions of Ballentine Street, and lots along Avent Ferry Road near Ballentine and Rogers streets. Holly Springs Cultural Center is a 5-minute walk to the parade route. Consider parking at a nearby park or school and walking to Main Street.

Accessible parking with a view of the parade is available at Food Lion.

Remember to arrive early. Roads near the parade close to traffic at 9 a.m.

The Town will have numerous public safety officers along the parade route, so flag one down immediately if there is an injury or concern, or call 911.

Parade viewers will notice additional traffic barriers spaced along the parade route to enhance safety measures. Constructed of heavy-duty plastic and filled with water, they provide an additional barrier between vehicles in the parade and people viewing the parade. Please do not sit on these barriers; you are welcome to sit or stand behind them. 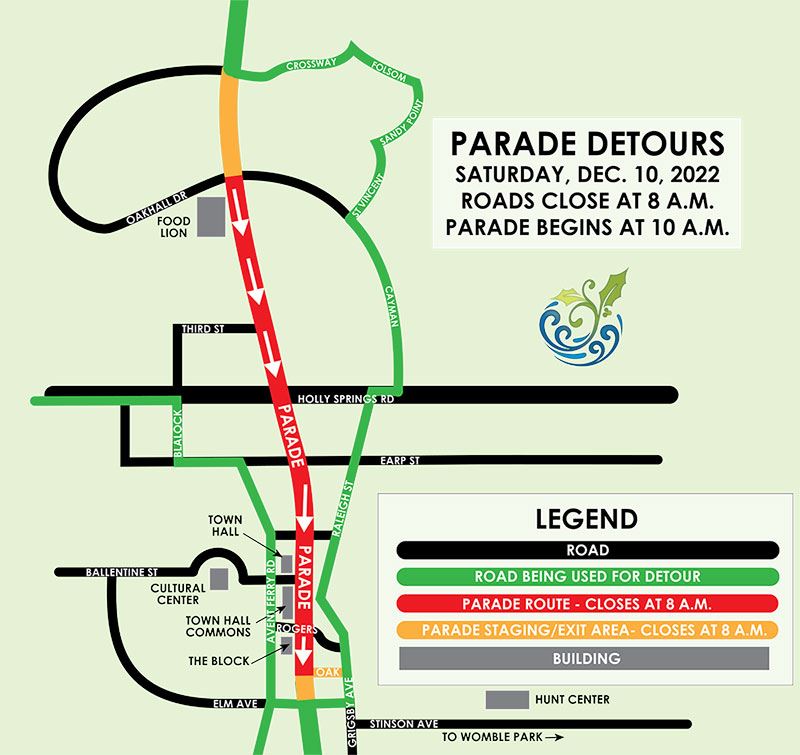 Thanks to our parade partner, the Kiwanis Club of Holly Springs.