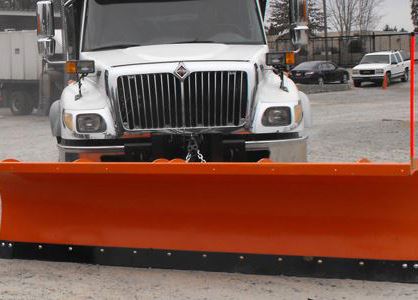 Depending on the weather forecast and current conditions, Public Works Department trucks are prepared with snow plows, sand and salt spreaders.

The primary goal is to keep roads passable for emergency vehicle access and public safety. During snow and ice storms, trucks with sand/salt spreaders may scrape or chemically treat roadways.

Two to six of these trucks may be on the road, depending on the storm type and timing. After accumulation of 2-3 inches of snow, the Department of Public Works will begin full-scale operation, which consists of covering six plow routes with either Town vehicles or private contractors if necessary.

Please be aware that it takes approximately four to six hours to complete snow removal operations even after the snow has stopped. Salting may continue as needed. Once the storm tapers off, plows will continue to clean and widen roadways. The last procedure of plowing major roadways is to push back the plowed edges, widening the area of cleared roadway. Once major roads are cleared, plows proceed into subdivisions, focusing on main roads and streets within subdivisions. Side streets and cul-de-sacs come last.

Cul-de-sacs and dead-end streets with steep inclines may be bypassed by snow plows; these areas are extremely slick and difficult to navigate, and the risk of damage to property is high. Streets with vehicles parked on both sides will be bypassed by plows until the streets are clear of vehicles, so park in the driveway if possible. Garbage trucks face the same challenges in these areas; large vehicles are heavy and may become stuck, have difficulty stopping and steering, and may cause damage to property. Until cul-de-sacs and dead-end streets can be safely traveled, a delay in waste collection may be experienced.